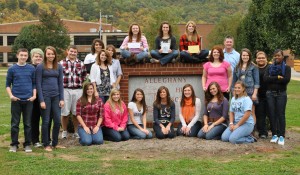 AHS students, clubs, and organizations have been collecting money for Kendall Bayne of Cave Spring High School. She has a rare form of cancer called Adrenal Cortical Carcinoma.Over $1100 was raised due to the efforts of the AHS cheerleaders, FCCLA, Youth and Government, Key Club, Expressions, Students for Christ, leadership class, and the MAC Club. A competition was held among first block classes to see who could raise the most money. The first block classes of Mrs. Green, Mrs. Terrell, and Mrs. Spinks were the winners.